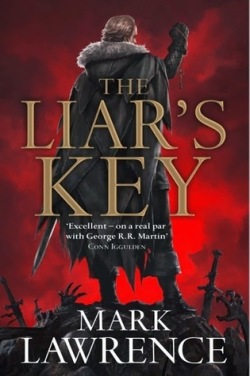 Time still heals all wounds, for now. But the world grows thin around this tome as the letters light up on the pages, their magic burning bright, casting long shadows toward the black void of Osheim.

As the sun is setting on the Broken Empire, shading dreams into reality, there is still a little time left for laughs, there’s still a margin for a handful of clever tricks and foolish hopes, there’s still a crack to let the last rays of joy in before it slowly closes around each step leading down to hell.

The Liar’s Key swallows you in a big wave, locks you into its tale, snatching the world away. It follows the journey of Prince Jalan Kendeth and Snorri ver Snagason from the village of Trond, pursued by foes, lured by enemies, with a score of deceits dancing to the beat of the key all about them, yet still finding aid in unexpected places and allies in unforeseen situations as they advance across the grand chessboard of their times and beyond.

While in Prince of Fools we learned of Snorri’s family from tales which and when he decided to share with us, Jalan’s memories weave around The Liar’s Key like the hook-briar, manifesting in ways that are both unpredictable, unsafe, and wild – like magic itself. Through this twofold journey, one leading him on a perilous path south across the Empire, the other pulling him deeper into the history of the Kendeths, he learns more about his family than in all his life spent at home and we in turn learn more about him, piercing through the layers of self-deception he carefully built around his past hurts. Through this we might finally understand that despite appearances he’s not so different from Jorg Ancrath in some respect. They are both conflicted characters, growing through or around wounds painful enough to corrupt the mind, trying to keep ahead as claws of their past are catching at their ankles, dreading their own imaginations, their true nature pouring out of them only at times when fear or bitterness cannot longer stay their hearts.

Mark Lawrence has a wonderful imagination which he serves on ravishing prose, expertly spiced with devilish laugh-out-loud humour. He continues to hone his skills as a writer, hooking us clean off with the prologue, weaving the storylines around us tight enough to steal reality, leaving us begging for more. 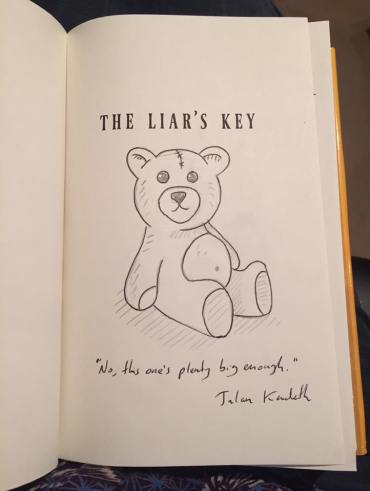 I might not be mistaken when I claim to be the only one who The Liar’s Key was handed to as a ‘required reading’ last year, when I was asked if I would read and critique the first draft of The Wheel of Osheim.

Without any spoilers offered I would only say: when a book lights a fire in you, you burn its mark into the world. And as it happened, on a cold December day, I sat down at the computer and started building a whole site dedicated solely to Mark Lawrence and his works.

For a name I decided on the one George R. R. Martin gave him when last summer he referred to Mark in our conversation, hence That Thorn Guy was born. But as they have it in certain far-away villages under those mysterious northern lights, this is a story to be told around the fire for another night.